Ancient lake’s sediments that today constitute the Geopark, contain the legacy of the fauna that existed in this territory millions of years ago.

Actually some of these paleontological enclaves can be visited, they tell us about the ecosystems that existed in Granada’s Altiplano lands in the last two million years. The Fonela’s deposit shows the diversity of the fauna that inhabited these lands before the human presence on the European continent. Visiting sites like this allows one to imagine the territory with the appearance of the ancient lake that formed the current Geopark and understand the ecological and fauna richness that reigned in these lands before the appearance of the human species. 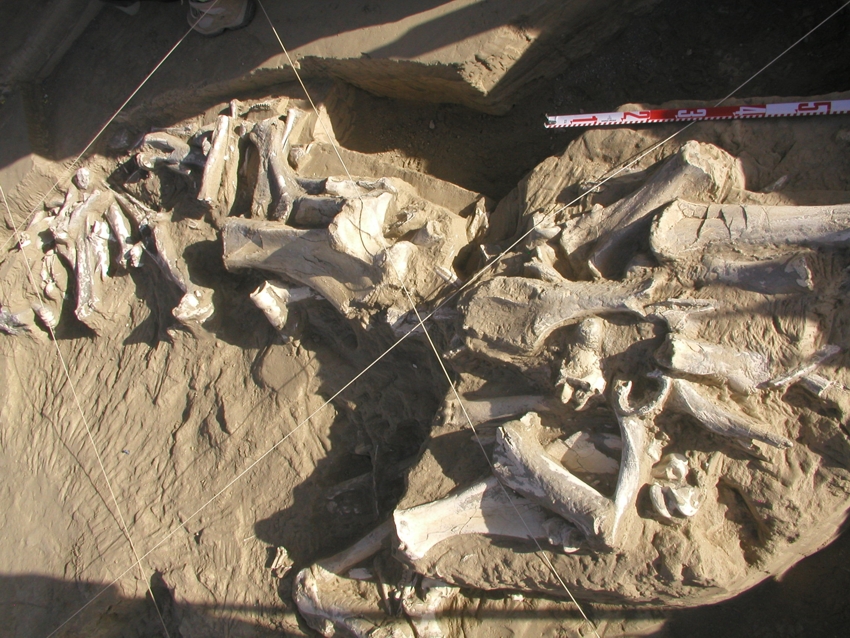 The first testimonies of the presence of our species have been dated 1.4 million years ago. This did not cause changes in the fauna of herbivores and predators in these environments. These first traces of Homo imply that we move from paleontology to the Archeology of the Geopark. The Orce fields (Fuente Nueva, Barranco León, Venta Micena) concentrate a large part of the scene of this transition. Along with the species of animals appear the first tools used by the primitive settlements of our species on the European continent. The sedimentary deposits of the ancient lake allow us to understand the great paleontological and archaeological legacy that can be observed in few parts of the European continent. Sites comparable to the famous African sites of human evolution and that we can visit in different sectors of the Geopark.

The Archeology of our lands has an unusual richness, noting that throughout the human history of the Geopark we can find unique heritage elements. The first communities of farmers and ranchers of the Neolithic and Metal Age left their traces configuring a unique territory, as we can see in the Gorafe Megalithic Park, which has 242 inventoried dolmens, whose necropolis can be visited. Large dolmens can also be visited in Baños de Alicún, associated with a large irrigation channel that may be one of the oldest in the south of the Iberian Peninsula.

Social complexity appears towards the end of Prehistory with the presence of the first stone-walled settlements towards the Copper Age, such as El Malagón (Baza) and the Bronze Age, in Castellón Alto (Galera). In this last population the primitive urbanism of these societies can be observed.

Entering the historical period of the Iron Age and Romanization of these lands we can visit the outstanding Iberian necropolis of Galera, with the unique presence of tumular funerary structures. In addition, some of the current towns have their roots at this time, such as the spectacular finds of the well-known Dama de Baza at the Cerro Cepero site and the current excavations of the Roman theater of Guadix, which configure the great impact produced by the Romanization of the ancient bastetan populations of the preceding Iberian period.

Finally, the material legacy of Al-Andalus is very abundant in the Geopark. Leaving aside the military constructions or Muslim fortresses, one of the signs of identity that persists to this day are the so-called “cave dwellings”, authentic troglodyticism that has constituted the type of habitual dwelling in medieval times and which has lasted until the present time. . Many of these cave dwellings can be visited on the routes through the Geopark, with outstanding Andalusian enclaves such as Hafas de Moralea (Benamaurel). This type of underground dwelling has survived to this day, constituting an ethnographic heritage.

In short, all this archaeological legacy forms the hallmark of the populations that continue to build the Historical Heritage of the Granada Geopark.